My grandmother roused me out of bed at the crack of dawn this morning so we could drive to Denton for a 9 a.m. call time on the second day of shooting for Beyond the Bridge. We filmed in two locations — a huge used book and record store in downtown Denton called Recycled Books, and in the director Ramon Malpica’s brand new house. He and his family are just moving in, and most of the houses in their subdivision aren’t finished yet.

Sometimes when you’re on set, you’re running around a lot, but I spent most of my “work” day in bed. Well, not in bed as much as lounging around on a comfortable bed pretending to read the book that’s at the center of the movie. It was a great day of shooting, and there’s one more day to go — I have to record a voice over to be used in the film’s final scene, where my voice is heard during the dramatic ending.

As always with this crew, they were great to work with. Everybody knew what needed to be done, and we got it all done by 1:30 in the afternoon.  That’s pretty fast considering that we were in two different locations and had to set up cameras and lights, and even do the set decorating (hanging pictures and arranging the easel and sketchbook I was working on in the scene) as well as shooting the three short scenes. The character I play, Jacob Carter, is something of an artist, and I got to add my own drawings to “Jacob’s” sketchbook — that was cool, and it made me feel better about spending a lot of this summer in an art class at Texas Tech University.

I think every county seat in Texas must have competed to have the courthouse that looked the most like a castle. Almost every small town — and some pretty big ones — have a courthouse square with shops arranged around a courthouse built in the grand style popular in the 1800’s. This is the Denton County Courthouse, about 40 miles north of Dallas. Denton is home to two large universities — Texas Woman’s University (TWU) and the University of North Texas (UNT). It was a beautiful morning in downtown Denton today and we started our film shoot on the courthouse square — just pick-up shots of me walking into the bookstore.

Recycled Books in downtown Denton is this huge 2-story book and music store. We shot outside — just shots of me walking across the courthouse square and going into the bookstore — and inside, in the lower level with me finding the book called “Beyond the Bridge” that is at the center of the film.

Our second location of the day was a brand new house in a subdivision in Little Elm, Texas (east of Denton). The crew had to set it up before we could start shooting — the character I play, Jacob, is an artist, so the room is decorated with “his” art work. 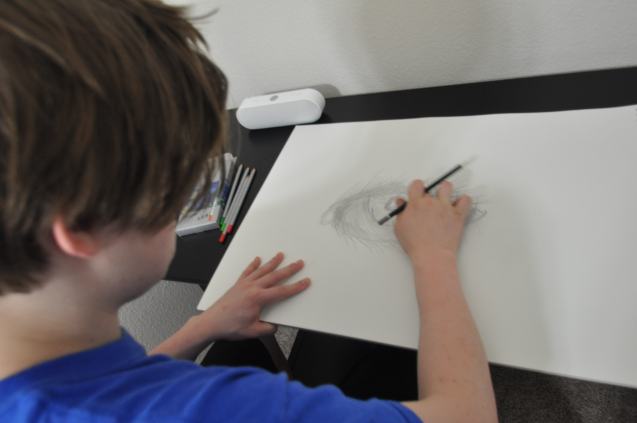 The character I play, Jacob, is an artist, so I added some sketches to “his” sketchbook. That was fun!

After the scenes of me sketching and shopping at the bookstore, I spent most of the rest of the day relaxing on the bed, while the director had me improvise various emotions as I read the book written by the film’s protagonist. 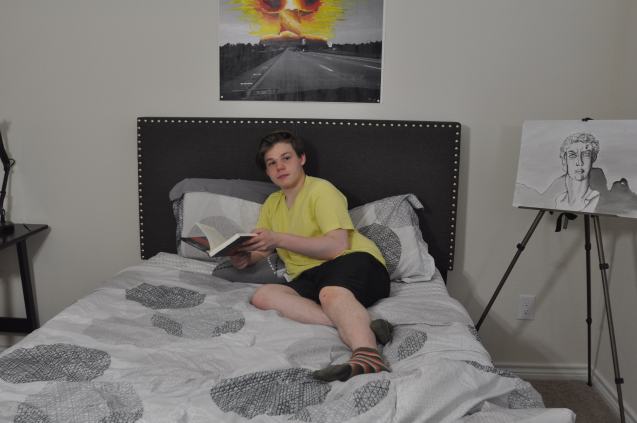