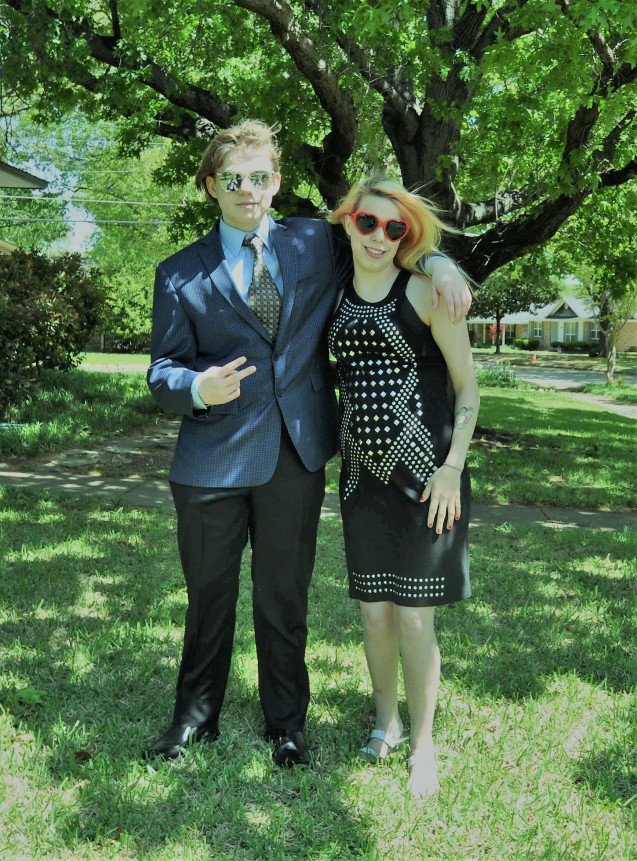 This is a photo of me and my older sister, Krystal McAlister, before the Beyond the Bridge premiere. 20 family members and friends showed up for the sold-out showing!

When you work on a movie, it’s months — sometimes years — before you get to see it, and you never know how it’s going to turn out. Usually, you’ve seen only the parts of the script you worked on, so you really have no idea what the finished movie will be like. So going to the premiere is a bit nerve-wracking. You’re excited, but I am always a bit uncertain of how I will look on the big screen, too.

But the Beyond the Bridge premiere was the biggest surprise of any TV show or film I’ve been in. For one thing, I was surprised at how many people turned out for the premiere — it was a sold out showing in a huge theater, and 20 of the friends and family members I invited turned up. Both my parents, my grandparents, cousins, friends from circus and acting class, my acting coach, and my best friend and his dad all came out. I hope they weren’t disappointed — I wasn’t!

The other surprise is that there were actually two parts to the film: the fictional drama I acted in, and real-life stories from the people who inspired the movie, who told their own personal stories of depression, suicide attempts, and the damage suicide caused to those left behind. If you didn’t see Beyond the Bridge at the premiere, it will be showing soon at various film festivals, and a DVD release is planned later this year.

But you don’t have to wait: it’s available to stream online anytime at www.freelanefilms.com — you can “rent” it (one viewing) for $1.99, or purchase unlimited streaming for just $3.99.

I had a great time at the premiere, and afterwards many of us had dinner together at a Mexican restaurant. It was nice to spend time with everyone after such an intense film about a serious subject. I learned a lot about suicide and depression during the filming, and even more seeing the whole film. Did you know that according to the Centers for Disease Control (2016 WISQUARS) suicide is the SECOND leading cause of death for kids, teens, and young adults ages 10-24?  Or that more teenagers and young adults die from suicide than from cancer, heart disease, AIDS, birth defects, stroke, pneumonia, influenza, and chronic lung disease, COMBINED?

A reporter asked me the other day if it was hard to play the character of Jacob in this movie, and the answer is yes. To say some of the lines — especially one section where he talks about suicide — I had to put myself in some places I had never gone before. Several people in my family said they cried during the movie because they couldn’t imagine me saying or doing those things in real life, but it looked real on the screen. That’s what I liked most about this movie: it isn’t a big blockbuster with tons of special effects, and I can always spot things that could have been done better. But the story is compelling, and it was all so real.

This is an important topic, and I hope lots of people see the film  In the meantime, here are a few photos from the premiere. I’m glad I got to be a part of it! 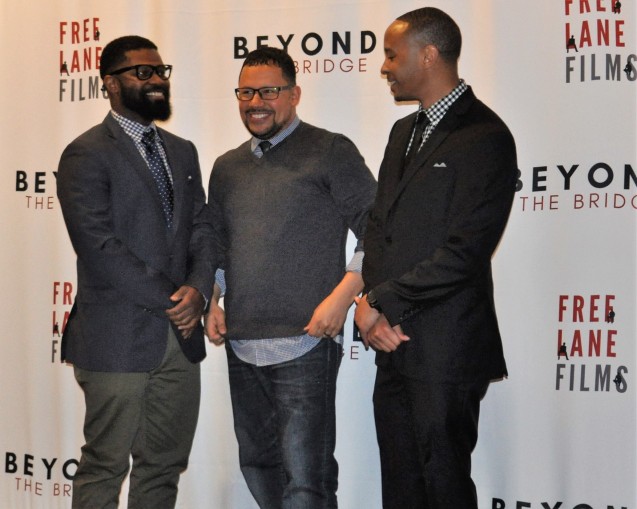 Beyond the Bridge was written, produced and directed by filmmakers Lindsey Cummings, Ramon Malpica, and Matthew Thomas. I didn’t know when I auditioned that it was their first film. They didn’t seem like newcomers to the business — the whole process was well managed, and it was a great crew to work with. 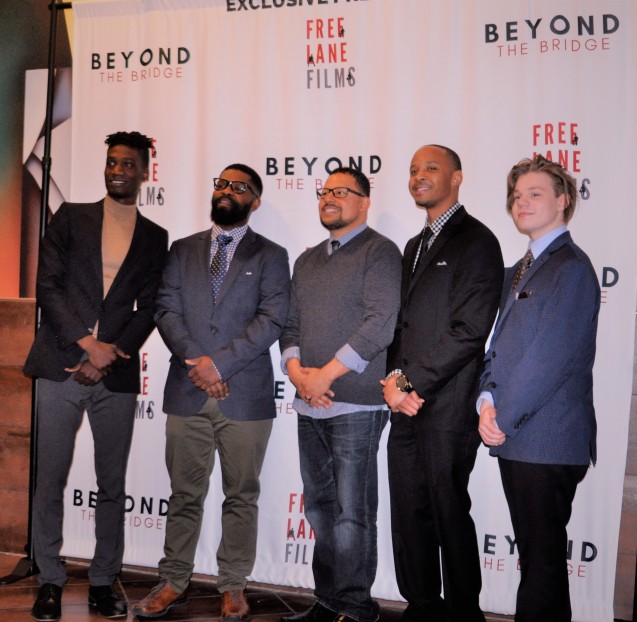 Elijah Britton (L) and Kameron Badgers (R), two of the lead actors in Beyond the Bridge, with the filmmakers and screenwriters. 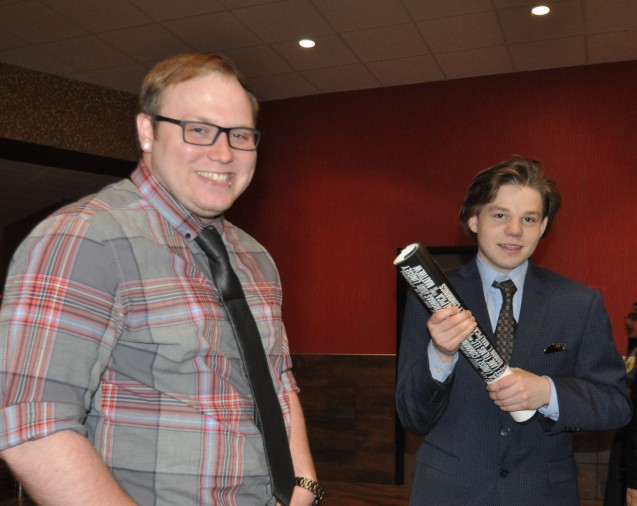 My cousin Zach McAlister and his brother Nick, my best friend Devin Chamlee and his dad, my parents and grandparents, my sister and her dad Geoff McAlister and step-mom Tabetha, my acting coach Nancy Chartier, actoring friends Zoe Gameros and her mom, Alan Dallas Brent, and Catherine Hatcher, youth minister and SF author Glen Clark were among friends and family who came out for the premiere. I am so lucky to have family support! 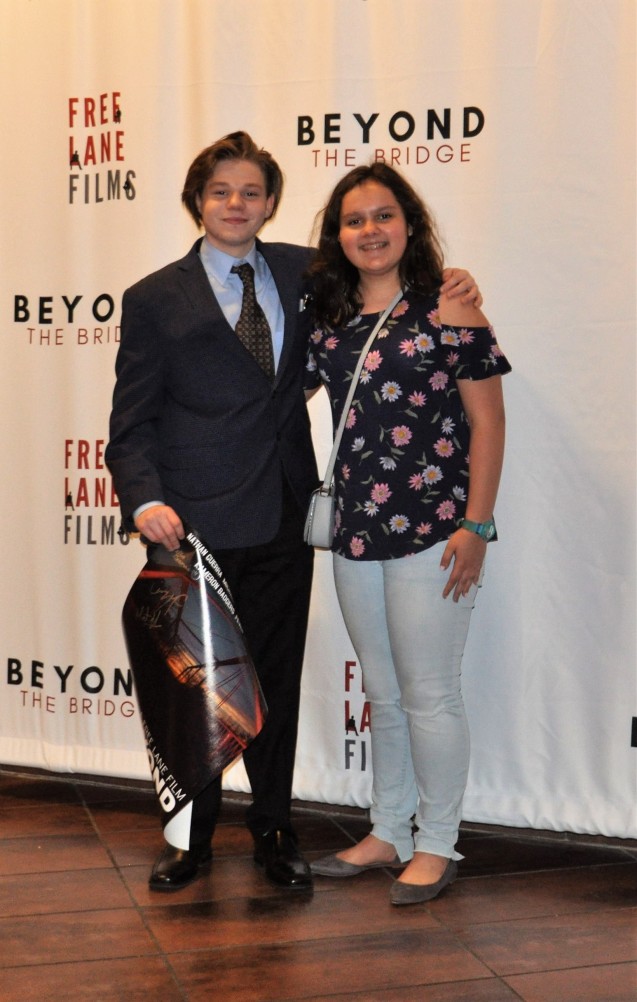 Zoe Gameros and I have known each other for a long time — first through Lone Star Circus, and now we both take classes with Nancy Chartier. It was nice of her to come out for the premiere — she’s a peer counselor at her school, and is one of those people who’s always ready to help someone who might be having problems, so this was a topic she was interested in.