I almost never do print photo shoots. But this morning, I was on a really cool magazine photo shoot at the Texas Theater in Oak Cliff. The family story is that my great grandparents had their first date at the Texas Theater in 1939, a week after meeting at the State Fair of Texas. They saw Mr. Smith Goes to Washington, a movie about an outsider who runs for Congress. 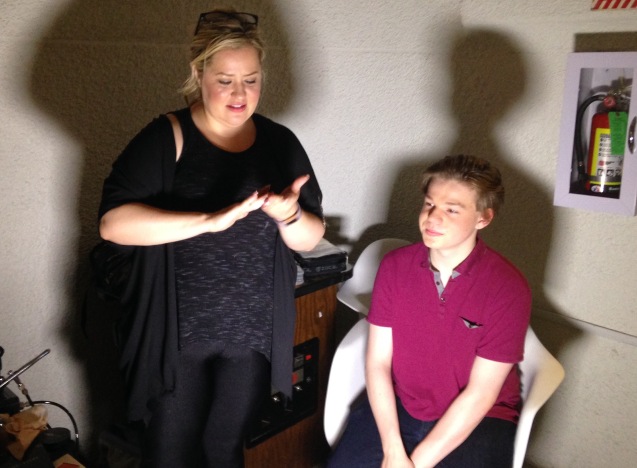 As usual on any set, the day started with wardrobe and make-up.

The article the photos were for is about situational awareness — what to look for, and look out for, in situations that can be dangerous. And I was “cast” as the “innocent-looking terrorist”. (The story asks people to question why someone — anyone — is wearing a backpack in a movie theater, or why there is a suspicious bulge under someone’s shirt, or why a panel van is idling in an area where kids come out of the theater. It could be a bomb in the backpack, a gun under the shirt, a potential kidnapper in the van.)

They had several set-ups for photos — outside near the ticket window, inside by the concession stand, and in the theater during a movie. While we were doing the photos, word came in about the shootings in Washington D.C. Boy, talk about a timely photo shoot!

Hope the photos turn out. This was a fun day — and we wrapped early. So we all got paid for a full day’s work, but we were done before 1:30 in the afternoon. That makes it a really good hourly rate, especially for the kids on the shoot.

There were a lot of cool actors on the shoot from Linda McAlister Talent, including Michael P. Gardner, Craig Cole, Omri Horowitz, Bryan Chatlien, Glen Olson, and Lisa Wilk. I’d worked with some of them before, but it was my first time to meet some of the others. Always cool to listen in when the pros talk about acting, tips on turning in the best audition tapes, and other topics.

Of course, one of the topics everyone was talking about today was the shooting in Washington, and the general subject of gun violence. I wish everyone could solve their problems without hurting other people. I’d like to hear the news one day without a single story about somebody being killed. I mean, I’m no fan of Ariana Grande, but killing a bunch of little girls at a concert is just plain evil. And I may not like a politician, but wouldn’t it be better to work to vote him or her out of office instead of shooting them when they’re playing softball?

Me, I don’t want to hurt anybody, and I don’t want anybody hurting me. Can’t we all just get along? Until that happens, I’m going to start being more “situationally aware” like the article we shot photos for advises! 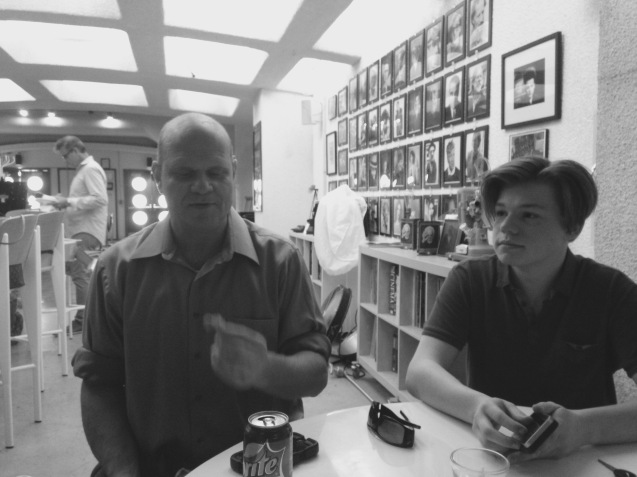 I’ve been a fan of Michael Gardiner’s for some time, but had only met him briefly once before. (He’s best known for American Crime, Salem, Dallas, and a slew of other TV shows, but he’s also in a lot of commercials, too.) He was giving me tips on booking more auditions by taping as soon as the notice comes out, as well as some tips on setting up to self-tape. Pretty cool of him to share his secrets to booking so much with me! Thanks, Michael! (By the way, the photo is black and white because we’re sitting under the skylights at about noon, with the sun directly over the lobby of the theater. The light washed out all the color anyway.)