Well, it’s September. About half of my friends are back in school. But I’m not — not this year!

Like a lot of other people I know who work in the entertainment industry, I’m going to be home schooled this year. That lets me focus more on the things I really want to do — acting and circus and art — instead of spending hours and hours every day waiting around and doing things that don’t really teach me anything.

I enrolled in one of the oldest “distance learning” schools in the U.S.  It’s called Oak Meadow, and is an accredited private school based in Vermont. I’m taking English, Science, Math, and Civics/History this year through Oak Meadow. My work is a combination of online and books or printed work. This is the banner Oak Meadow uses on the website we log into to turn work into the teachers — I think it says it all.

The best part about home schooling so far is that I can do it whenever I want. My grandmother is making me keep to a schedule, but I don’t have to “start school” until 10 a.m. Yay! I am NOT a morning person. And no more trips to truancy court because I had an audition or booking. I can just do my work while I’m on set, or in the car on the way to the set, or take a few days off and then catch up later.

I liked West Junior High, the Richardson Arts Magnet School, but it was just too stressful taking two AP classes and two magnet programs on top of everything else. I don’t think I did anything last school year except homework — night after night, until 10 or 11 p.m. every single night.

To be honest, the performing arts part of the magnet program just wasn’t very challenging. A lot of the stuff we studied was stuff I learned when I was 7 or 8.  So it just didn’t work for me — and don’t get me started on truancy court. I was on the honor roll, won science fair prizes, and never got in trouble — but year after year, I’d get dinged for missing too many days of school because Texas has a “zero tolerance” policy for absences. I could understand it if someone is skipping school and failing, but I think they should make exceptions for kids who have to travel to compete in sports, or kids like me who perform and have to go to auditions. As long as we get our work done and keep our grades up, what does it matter? Guess that’s why so many young actors I know are home schooled.

Because I don’t have to sit through hours and hours of school, this year I have time to actually learn things. It isn’t part of my home school curriculum, but I’m working on geography with my grandmother, and also working on accents, enunciation, and reading aloud. Right now, I’m reading Firefight by Brian Sanderson. I am reading a chapter a day, out loud, and working on reading it without any kind of Southern or Texas accent creeping in.

I just started the home school (daytime) acting class at The Young Actor’s House. I’ve only had one class with Lauren Lazell so far, but she seems like a really good teacher. I miss Tuesday night classes with Nancy Chartier — but for now, it just isn’t in the schedule because of some rehearsals that are happening on Tuesday nights.  Can’t tell you any more right now…but I should be back in Nancy’s classes in October or November.

I’m also working on an independent study art course. Right now, I’m focused on an art competition I’m entering. I’m doing a large 24 X 36″ oil pastel image of the “beast” (a seven-headed dragon with 10 horns and 7 crowns) described in the Bible. I don’t know what the next assignment will be yet, but if it’s half as cool as this one, it will be tons of fun. 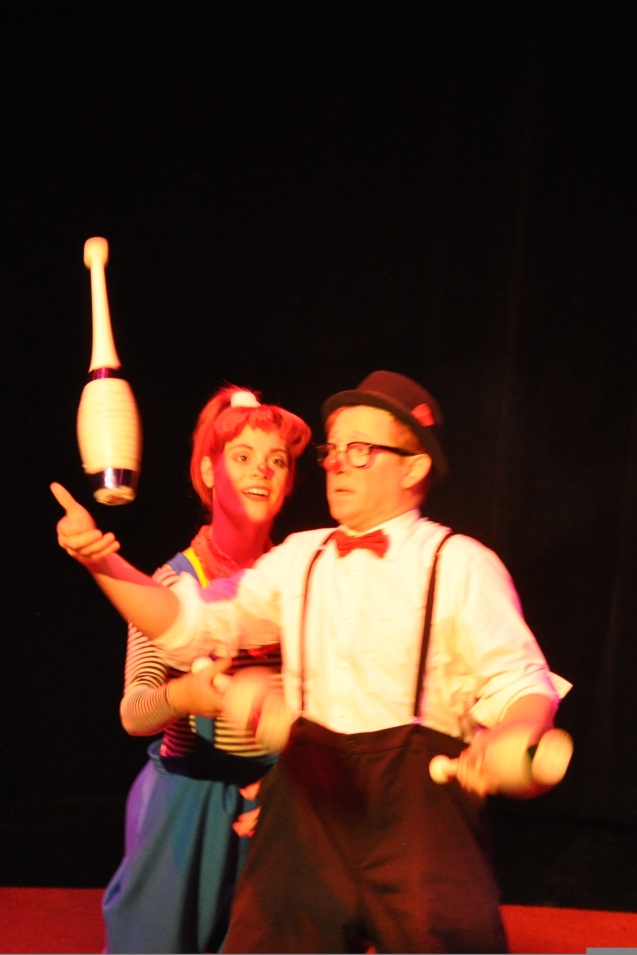 Julio and Kelli  are amazing performers. She can do it all — silks, juggling, clowning, contortion. He’s a clown and juggler, and a fabulous teacher.  I’ve learned tons from him this summer. This fall is going to be fabulous, too.

And, of course, I’m working on circus stuff.  I’m taking private lessons from the amazing Julio Ramazini — he’s such a great teacher! He’s a clown and juggler and circus performer, and he’s a great photographer, too.  I’m taking Thursday night classes at Lone Star Circus School, too. They have some really cool new classes this year — if you’ve ever thought about running away to join the circus, check out this fall’s schedule.

Jess Patterson is even teaching hula hoop on Monday nights — she’s the best!  Asaf Mor is teaching straps & rope on Thursdays, and those are just a couple of the new classes.  Beginner and intermediate kids classes are on Saturday mornings, but for the first time since I was 7, I’m not taking a Saturday class at Lone Star. Seems kind of weird to be able to sleep in on a Saturday after all these years, but I’m a teenager, so I love to sleep late.

Slappy (Tiffany Riley) and Monday (Dick Monday) were my very first circus teachers. I love to watch them perform. They make it look absolutely effortless, but I know how hard some of the stuff they do really is. Super talented, and the nicest people in the world, too.

One of the great things about home schooling is that my grandparents don’t say, “You can’t do that — it’s a school night.” So we went to the Pocket Sandwich Theater the other night to see the Goofballs Cabaret show, and we already have tickets for the October 6 Goofballs show, too.

You can get tickets for just $10 at the Pocket Sandwich Theatre by calling 214-821-1860.  The Goofballs Cabaret is a PG-13 show, but I saw several families with younger kids and the slightly risqué content went right over their heads and the youngsters had a great time. I laughed so hard — Dick Monday and Tiffany Riley from The New York Goofs are hilarious, and Fanny Kerwich (founder of the Lone Star Circus) was hilarious, too.  And, of course, The Ramazinis — my juggling coach Julio and his wife Kelly — were amazing. Magic Mike (no, not the one from that movie about male strippers, the local magician who was called Magic Mike long before the  movie came out) was great, too.

The show had dancing, magic, hula hooping, comedy, a pianist, juggling, aerial silks, and even a musical saw performance. The food at the Pocket Sandwich Theatre was good, too, and there isn’t a bad seat in the house. Hope to see you there on October 6 — Dick Monday, the creator and director, is promising a completely new show for next month.  Can’t wait to see it!