It’s circus week! Over 140 students from the Lone Star Circus School have been working hard all year, and this weekend they’ll be showing their skills in four shows at the Granville Performing Arts Center in Garland, Texas.

The show is called Ice Cream! — and like the nursery rhyme says, we’ll all be screaming for Ice Cream this weekend. Tickets are $20 each, and are available online here.  (The shows are worth the price — this isn’t just a kid’s recital. It’s a professionally designed, produced, and choreographed show that includes both circus professionals and students.)

The shows are scheduled for:

Students from the Dallas International School — where circus arts are taught as part of the French-language curriculum — make up the bulk of the cast in the first three shows, while students from The Palestra — a gymnastics school in Addison, Texas — made up the cast of the Sunday show. And some of us are in all four shows.

The music this year is great. We’ve got everything from rock to country, classical to jazz — and even a bit of disco. (One of my acts is set to an old disco song called “Freak Out” that’s really fun.)

Fanny Kerwich is the creative director at the Lone Star Circus. She’s a 7th generation circus performer, and she is the best director in the world, I think. She takes over a 100 kids and turns them into a professional circus troupe every year. She is amazing!

One of the great things about the Lone Star Circus School is getting to work with Fanny Kerwich, the founder and creative director at Lone Star Circus, and all of the other great coaches. Alora Scavulo, Kelly Shea, Dick Monday, and Tiffany Riley are the best. 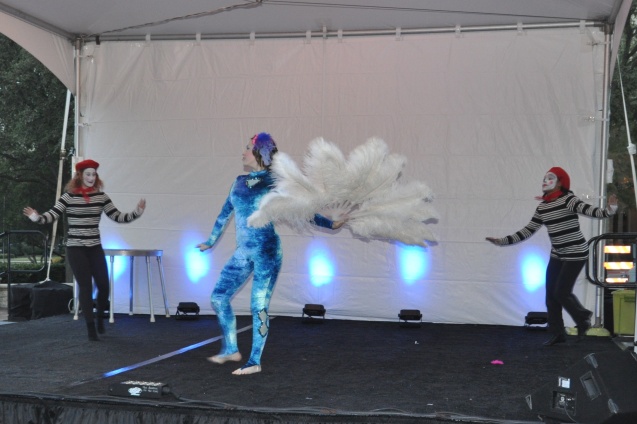 The two mimes in this photo from a show last fall are my circus coaches — Kelly Shea is on the left, and Alora Scavulo is on the right. They are amazing — they do everything in the circus: silks, trapeze, clowning, the lyra, contortion, acrobatics, and even juggling. They’re also great teachers.

All of them are super teachers, and they have performed with circuses all over the world. So we learn the basic skills — and then we get to work with the professionals who can show us how to turn our skills into a real show. Truett, Alora, Kelly, and all the others are patient and helpful — unless you goof around and do something dangerous. Then they aren’t so patient, because they aren’t about to let us get hurt if they can help it.

But the thing I like about the Lone Star Circus School compared to other places I’ve taken classes is that they treat us like real performers, not just kids. For instance, I can juggle all kinds of things — but so can a lot of people. So they let me work on new tricks on my own. And then Fanny and the other coaches take my skills — advanced or not — and turn my juggling into a real circus act, with choreography, and what Alora calls “Style and Smile”. That’s when you learn how to look at the audience and actually show them that you want to perform for them.

Getting to work with the best clowns in the world — Tiffany Riley (Slappy) and Dick Monday (Monday) of the New York Goofs — is another big benefit of the Lone Star Circus. I went to a summer camp three years ago with Slappy & Monday that was my first taste of circus, and I’ve been hooked ever since. 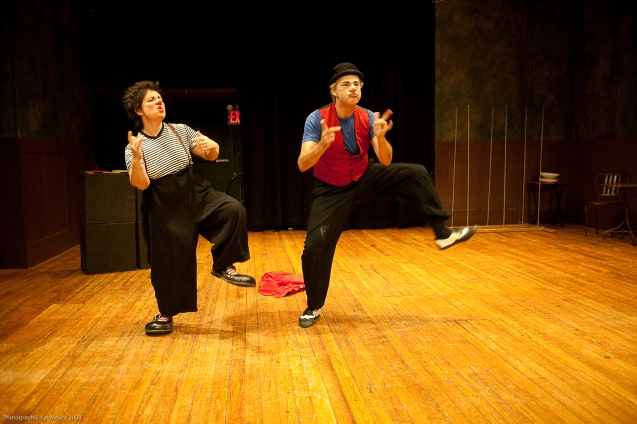 Slappy and Monday —  Tiffany Riley and Dick Monday — are the best clowns in the world! And they’re great teachers, too.

This year, Dick Monday helped me and two other people polish a comedy juggling routine. He’s a great juggler, an award-winning actor, and a fantastic clown, and he took a short routine and turned it into something really cool.  I can’t wait until we show it off this weekend! 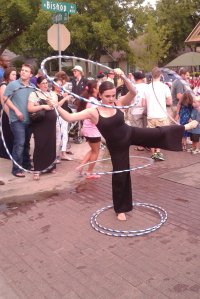 Jessie Patterson is one of my favorite Lone Star Circus performers to watch, and she’s coached some great new performers this year, too.

One of the other things that’s different about the shows that the Lone Star Circus School puts on is that these aren’t just kids recitals. They’re complete performances — with professional make-up artists, gorgeous costumes with more sequins than a Las Vegas show — lighting, special effects, and great music. And the kids who perform are really, really good.  (Either that, or they’re really, really cute — you should see some of the 3-year-olds in this year’s show. Even I think they’re cute, and grown-ups can’t help going, “Aww…” as soon as they get on stage.)

One of the new things this year is that we have some amazing soloists performing. Jesse Patterson is probably the world’s greatest hula hoop artist, and she’s been coaching several other performers this year. I saw one of the girls from the Dallas International School the other day, and she’s AMAZING. I think Jesse is training her future “replacement” — just the way Fanny trained Jesse when she decided not to perform her hula hoop act as often.

Nick Rainone (Zepp) is a great clown who will be performing with Slappy & Monday this year, and my friend Chet Monday is going to juggle. His act is great — and it’s hard, too (I tried it), but he makes it look easy and fun.

This is me at a Christmas show last year with Zerp -Nick Rainone – one of the best clowns I’ve ever seen. His act is great even if I’m not in it this time.

I’m in all four shows this year. On Friday and Saturday, I’m performing a diabolo and hat spinning routine to Michael Jackson’s Smooth Criminal. It’s similar to the one I did in the Wallace Elementary School Talent Show a couple of weeks ago, but Fanny Kerwich, the artistic director & founder of the Lone Star Circus, changed the music and the choreography, and really tightened it up.

In the talent show, my act was almost 3 minutes long, and in the Ice Cream show, it’s just 2 minutes long — but all of the major tricks are still there. (Everybody likes the hat spinning and juggling, but the audience really likes my “jump rope” trick — something I came up with myself.)

On Sunday, I’m doing the diabolo routine, plus:

The bad news (for me) about being in several different acts is that I have to change costumes. I hate changing costumes — but it’s better than trying them on and getting them fitted before the show! And, of course, I have to attend every rehearsal.  So this week, you’ll find me at the theater every day.

Yesterday, we rehearsed from 4:30 until 7 p.m., and that’s the schedule today, tomorrow, and Thursday, too.  Then the first show is on Friday. (That’s the fun part.) But rehearsals can be fun, too.

Chet Monday is a great performer. His juggling routine looks fun and easy, but it’s hard.

I love all the activity backstage, where people are stretching and practicing problem tricks. A lot of the kids (including me) are doing homework in the green room until it’s time to move into the wings to get ready to go on.

During rehearsals, there are a lot of things to work on. By the time we get to the theater, everyone knows their own act perfectly. (Fanny, Alora, Kelly, Truett and the other coaches make sure of that! We’ve all been practicing hard for weeks and weeks in class and at home.)  But during the last week of rehearsal we have to get used to working with the MC or ringmaster, following the light and sound cues in the theater, and knowing where our marks are on stage.

How is it dangerous? Think about a group of acrobats suddenly cartwheeling onto the stage. They can’t see you from back stage, so they have to trust that you’re not in their way. If you’re in the wrong place, someone (probably you, but also other people) can get badly hurt. And it isn’t just acrobats. Everyone who comes on stage has a certain route they’re going to take — jugglers, clowns, hula hoop artists, acrobats, contortionists, and their various props move pretty fast — and the stage hands who are moving equipment around move even faster.

The other thing that’s important in the dress rehearsals this week is getting all the costumes right. Everyone has costumes fitted, but a lot can happen to them. My grandma and some of the other women are backstage helping the costume mistress repair costumes. Grandma brought home two costumes last night to mend in places where they had been torn, or had loose sequins or something.

But, come Friday, all the confusion and practice and hard work will pay off. When the lights and the music come up, we’ll be ready, and we’ll put on a great show.  I can’t wait! I love circus week.

Update: How exciting! The Lake Highlands Advocate visited my blog, and carried a story about the Lone Star Circus School’s Ice Cream show on its website!  Here’s a link to the article: http://lakehighlands.advocatemag.com/2013/05/why-isnt-this-wallace-elementary-student-famous-yet/