Besides the flying trapeze that I told you about before, we worked on a lot of other things at French Woods.  For instance, I went to the Maroon 5 Rock Shop — a really cool place that the band Maroon 5 gave to the camp because they met each other when they all went to summer camp there — for guitar lessons.  I can play Iron Man on the electric guitar now! 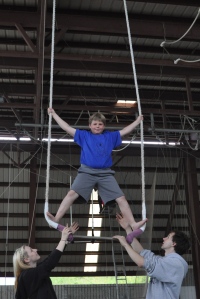 We also went horseback riding, swimming, silk screened T-shirts, and played tennis.  But the most fun for me was circus.  A lot of the things we did there were stuff I’d done before, like the stationary trapeze, juggling, and rolla-bolla.  But some of it was new.

I’d never been in the cargo net before.  You can’t really see me, but that’s me in the blue net doing a “fishtail”.  It looks pretty cool under the right light, when everyone is way up high moving with the music, I think.

I also worked on balancing on the ball.  A lot of the girls at Lone Star do this, and they look really cool.  Georgia makes it look easy, but it isn’t.  Not really.  I was glad I had a spotter!