Every summer since I was 10, I’ve gone to summer camp. And every day during camp, I ran at least a mile — usually more. But this summer, I stayed home, and I didn’t do any running at all.

At least not until I booked a gig to shoot some “B” roll footage for a science documentary. “B” roll is industry jargon for “background roll” — the images that you see on the screen while a narrator is talking. Usually, when you are shooting background footage like this, you’re paid as an extra, and you sign what’s called an “unidentifiable talent” release form. This means that the producer can do what they want with the footage, and you don’t get paid except for the time you put in while it was being shot — but you aren’t identifiable (that is, someone looking at the footage won’t necessarily be able to say, “Look! There’s Kameron!”). There are different kinds of releases and contracts depending on what kind of job you booked. My agent always makes sure I’m signing the right kind of contract, and that I’m protected so I get paid the right amount for the work I do. I love my agents at Linda McAlister Talent!

Anyway, it was relatively cool on Friday morning when I met up at a stadium in Carrollton Texas with actors Felipe Tello, Levi Patton, McCormick Van Vleet, and Nicholas Mullen. Joey Kendall from AMS/Alchemy, a film production company in Dallas that I’ve worked for a number of times, was the director, and Osman Tello was the director of photography. We all brought our own running shoes, but he had track shorts and shirts for us — I wound up in a bright neon yellow-green shirt I’m sure you could see from outer space.

The crew was already set up with a camera on a ladder, and they lined us up on the track and had us run around a corner, stop, and then come back and do it again while they got the footage they wanted. And that’s when I discovered two things. First, running a mile in Vermont or upstate New York in July or August isn’t anything like running in the Texas heat. And second, I learned just how out of shape my muscles are from not running this summer. Ouch! My muscles were super sore on Saturday.

Luckily for me and my aching muscles, the crew from AMS was super organized and we got in, got the shoot done, and were finished early. We were booked (and paid) for a two-hour shoot, but we were there less than an hour and a half even with several breaks for nice cold water.

I appreciated that, because even though 94 degrees is relatively cool for a Texas summer, it’s still awfully hot when you’re running track in a sunny stadium while a high school drum line practices at top volume. (The drums didn’t matter to the shoot because they were shooting “B” roll — no sound. But it didn’t help the headache I developed running around in that heat! Even if they were pretty good drummers.)

Here are some pictures from the shoot. Actors never know what kind of job they will get booked for. This week I was a track runner for a science documentary. Next week, I’m a troubled kid who commits suicide. And who knows what I’ll be after that? It’s just one of the reasons I enjoy being an actor so much. (And I like the money, too. Let’s not forget that!) 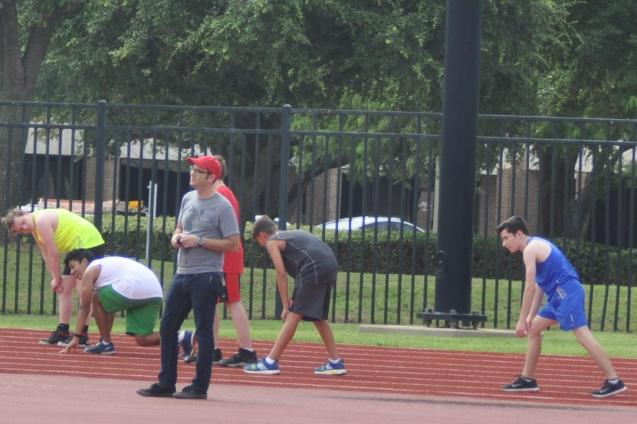 The actors are in place, and director Joey Kendall is waiting for the go dignal from the director of photography Osman Tello.

For the next hour, we ran around a corner, stopped, walked back to the starting point, and did it again while the camera crew shot down on us from a tall ladder. 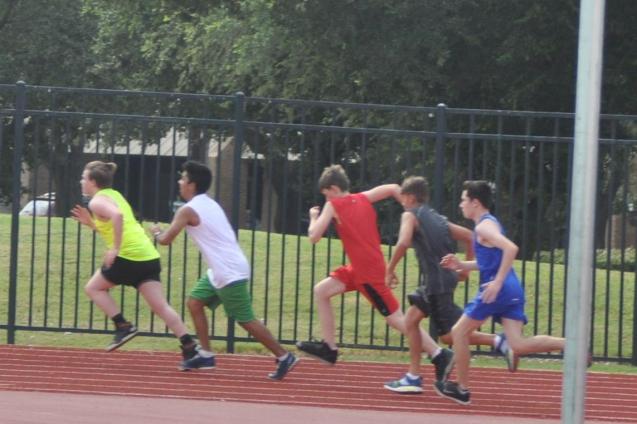 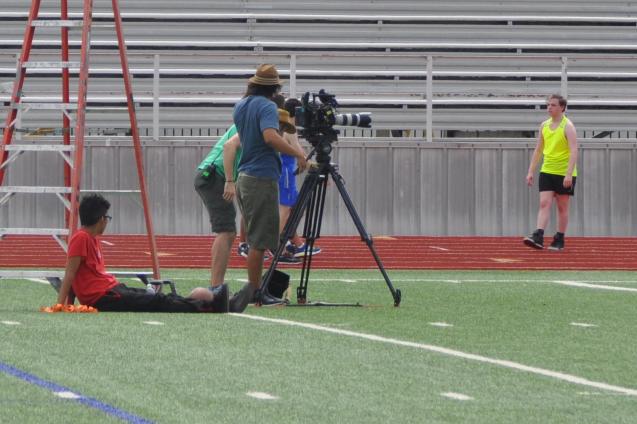 After about an hour of shooting from an overhead vantage point, the director of photography set up for a series of shots at ground level. They were done quickly, and we ended the shoot half an hour early.