Last night, we went to a private preview of a short film called Missing. Maria Golihar was the producer, Brian Mbipeh was the director, and August Jaeggli had the lead role of Grant.

Lance Williams was Charlie, and I was Billy — two local bullies who made Grant’s life hard.  It’s kind of funny, but August and I played bullies who tormented Lance in another film (Changed) late last year.  They’re both cool guys and I’m glad I got to work with them twice.

Here’s how the movie was described on the back of the DVD:

“SOME PEOPLE DON’T VALUE WHAT THEY HAVE…

Adolescence can be a difficult time in a young man’s life. For Grant, a timid boy with a heart of gold, life is an endless struggle. Dealing with a careless father, an absent mother, and torment at the hands of neighborhood bullies, e finds solace in an unlikely friendship with a kindhearted elderly neighbor.

But with reports of missing children on the rise, Grand soon finds himself at the center of a disturbing local mystery…and the truth may be closer to home than he could ever have imagined.”

The film has some scary twists, and I am not going to tell you anything else about the plot. Let’s just say that the audience gasped out loud several times during the screening last night and leave it at that.

You know how you always see these big celebrities on the “red carpet” outside film premieres, with everyone pointing cameras at them and them posing so perfectly for the pictures? It’s harder than it looks.  This was just a privact showcase for a short student film here in Dallas, but I felt like I was being hunted, posing for picture after picture, with person after person.

My mom got to come to the movie last night. It’s the first time she’s been able to join me for anything related to acting, so I was very glad she was there. My best friend Devin and his dad Ben Chamlee were there, too, and so were my grandparents Fred Holland and Deb McAlister-Holland.

Missing was one of two movies that were in last night’s showcase. The other one was called Playing with Dolls — and it was downright scary. I had auditioned for that one, too, but I think I’m glad I got the part in Missing instead. At least my character in Missing survives!

After the two films, there was a question & answer session where the cast and crew were called up front to answer questions from the audience. And, then, we all went out to celebrate by having dinner at The Outback steakhouse. Last, but not least, I picked up some clothes and a toothbrush, and left for a camping trip with Ben and Devin.

Summer has finally started!  Here are some photos from last night.

Sometimes, they ask actors to walk through a line and they pose you in front of a backdrop of some kind before you walk into a movie you’re in. And then you stand there trying not to fidget while all these people take photos of you. It’s harder than it looks. 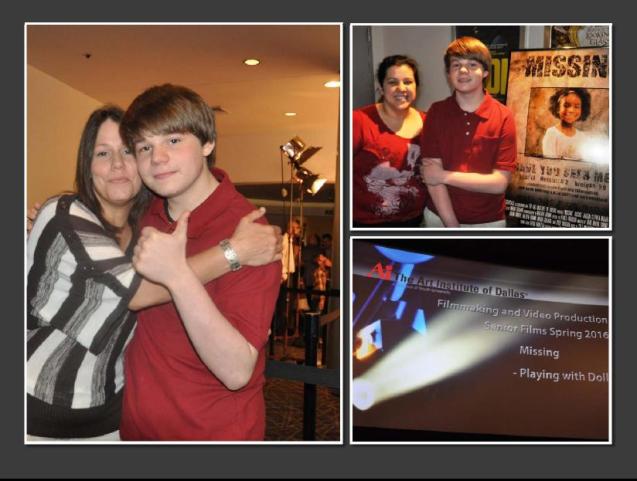 My mom Ilana got to come to the film last night, so that was cool. Maria Golihar (upper right) is the producer for the film. She was really, really cool — I’d love to work with her again. The photo in the lower right shows the screen that came up just before the movie started. I was so excited to see the whole film, because all I’d seen was the trailer and a few clips during post-production when I went into a sound studio to record some voice over.

This is what the audience looked like. My best friend Devin Chamlee and his dad Ben came, and so did my grandparents. The auditorium was full.

Every time I am in a movie, and I see myself 20′ tall on a big screen, it seems unreal. We were sitting near the front because my grandmother uses a walker, so we had to look up at the screen — she took these photos of the screen during the film. Strange to see a giant “me” rushing toward us! 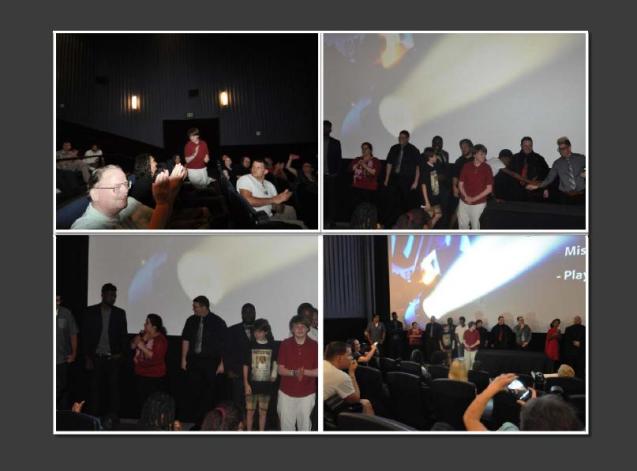 At the end of the film, they called the crew of each of the films down front, and then added the actors. So there was more posing for pictures. It was fun. This was a great crew, and I’d love to work with any of them again.

3 thoughts on “First Look at the Movie Missing, The Angelika Film Center June 9, 2016”