Y’know how you can hear something over and over, but you don’t get it? That happens to me a lot in math class, but I didn’t think it happened in acting class.

Then, yesterday, I was in an audition boot camp session taught by Del Shores, and something he said got through to me. I am sure I’ve heard it before from my regular acting coach Nancy Chartier, but I never really got it until Del showed me the difference between the monologue I did before I tried his tip, and the monologue I did when I tried to do what he said.

What he said was, “You have to really believe that you’re the character. Breathe in the part, and forget that you’re an actor. You have to really become this kid who is experiencing what the character is going through.” Then he broke it down for me and said, “Imagine the wall your character is looking at. Imagine standing next to the man he’s talking to — he’s bigger than you are, and a little bit scary, and you’re kind of nervous.”

Now, I know that “become your character” probably sounds like a really basic acting tip to anyone who is an actor.  And it is, I guess. But when he broke it down for me and told me HOW to do it, I got it.

Maybe Del is such a good director and coach that maybe I paid more attention to him than I have before. Or maybe it was the way he explained it. I don’t know, but I got it, and I never had before.

I guess that’s why he’s such a successful Hollywood director, writer, and producer: he’s good at making actors understand what they need to do. If you don’t know who he is, check out his IMDB page. He’s been behind TV series like Dharma & Greg, Sordid Lives, and Mr. and Mrs. Smith — and he’s won all kinds of awards for his films.

This is the second time I got to work with him. The first time was when he helped me tape some scenes for my demo reel. He does classes all over the country, so if you’re an actor — or you want to be one — check out his web pages and get on the mailing list for anything he’s teaching in your area.  He keeps the class size small — there were only about 10 people in yesterday’s workshop, and I was the only boy my age, so there is lots of time to work with every student.

Del doesn’t make you feel dumb if you mess up, and when he tells you how to do something different, he makes you feel as if you are already pretty good and doing things a little differently will make you very good. Both times I’ve worked with him, I’ve come home feeling like a really accomplished something when I worked with him. You will, too. 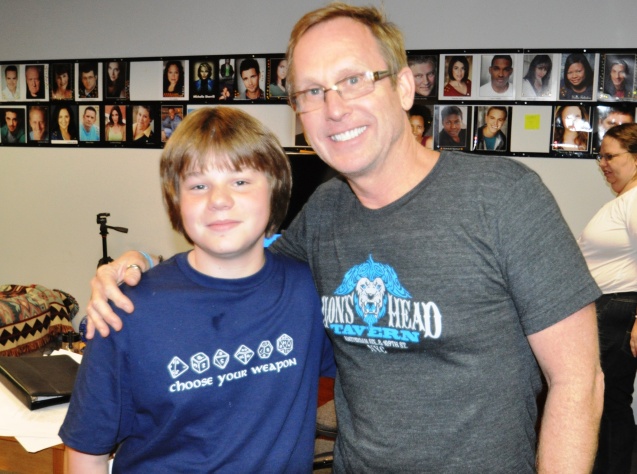 This is me with Del Shores at the end of yesterday’s acting bootcamp. We had to prepare two scenes (a monoloque and a 5-line script for a bit part, something we’d auditioned for but not gotten), and then he gave us another scene we had to cold read. Lots of work, but worth it!