(Kameron Badgers is at Circus Smirkus Summer Camp, Session IV.  Because of an ear infection, he’s been ordered to keep his feet firmly on the ground for the first week of camp — so no  aerials, unicycle, slack or tight wire, balance ball, rola-bola or acrobatics.  That leaves clowning and juggling.  Here are a few pictures published on the Circus Smirkus CIT Blog, or the camp’s photostream on Flickr. He’ll have more photos and probably a video or two to post when he gets back. — Deb McAlister-Holland, Kameron’s grandmother.)

On Sunday, July 20, a group of Smirkus campers try out the juggling props during registration. 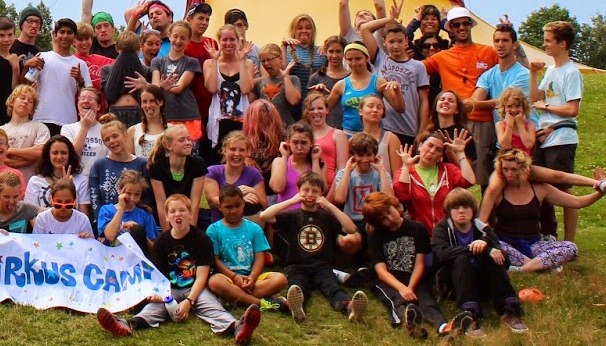 This is a cropped version of the first day of camp group photo — obviously, Kameron and some of his friends have already been to Clown Alley, as they are all making “sad clown” faces for the camera.

Tutu Tuesdays are a regular occurrence at Circus Smirkus camp — and everyone (all ages and genders) gets into the act. Kameron’s tutu is purple.

Practice with Nic Rainone (Zerp) put Kameron way ahead of the group when it came to tandem juggling. This snap of Kameron and Andrew juggling together was taken on Thursday of the first week. 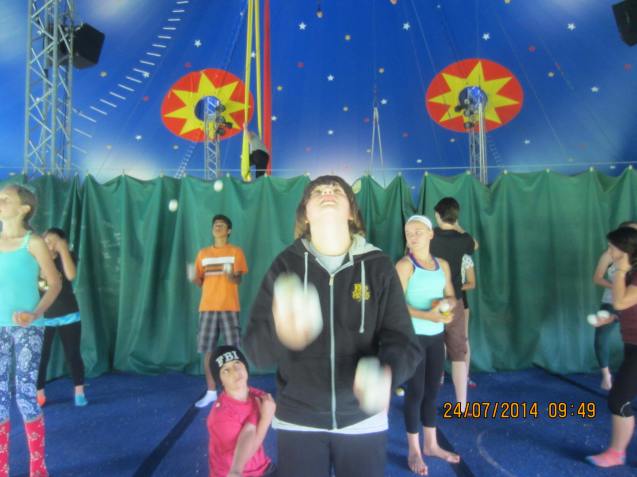 Kameron is Juggling four balls in this snapshot from Thursday July 24 2014.