I haven’t posted anything new in several weeks. That’s because I’m back in regular school. Last year, I was home schooled, to have time for a TV series and several films I was working on. But this year, I started my freshman year at Lake Highlands High School. That means I don’t have a lot of time for anything except school, circus, and acting.

Circus is pretty cool this year — we have several new students in our Thursday night juggling class at Lone Star Circus, so I get to spend more time working on passing and other tricks, and finishing work on my 5-ball routine. We’re putting together a performance for later this month as a fund-raiser for a school, and I’ll post photos when they are available. 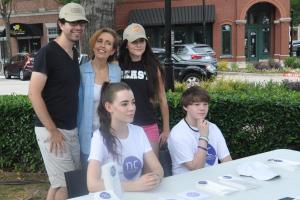 Earlier this year, I got to represent Nancy Chartier’s Acting Studio by working a booth at an art fair set up for the film “Color Me You”.  That was a fun day on set! I’d be happy to hand out literature and recommend Nancy as an acting coach to anybody who’s serious about working in films, TV, or commercials. She’s great! Marco Bottiglieri (at left), Nancy Chartier (center), and Ashla Soter (right) are behind me at the art festival booth I was “working” in my scene for the film Color Me You.

I’m also back in class with Nancy Chartier, one of the top acting coaches in Dallas. I just love her. She’s such a good teacher — and a great actress, too.  Did you catch her in the season 5 premier of the Netflix series Longmire? She was great, of course!

I’ve been going to class with Nancy for several years now, but I hadn’t been in class in nearly 8 months because of travel, working on a TV series out of state, and other conflicts. But this year, I’m determined to get to as many classes as possible.

And of course, I’m back at work on various acting projects. Since I can’t miss much school (and I haven’t missed a single class due to auditions or work so far this year — just in case anybody at my school is reading this!), I can’t work nearly as much as I did last year. But that’s ok.

So far, high school is pretty cool. For one thing, I don’t have to be at school until 9 a.m. Besides all the usual stuff like algebra, English, biology, and world geography, I’m taking Latin and debate this year.  I’ve got a four-day weekend this week — today is a teacher training day, and Monday is Fair Day.

So I’m going to Austin to see Duncan McAlister starring in McNeil High School’s senior drama, The Crucible, tonight, and then enjoying some time with family and friends this weekend. Can’t wait — it should be intense, as Duncan’s character winds up getting hung for witchcraft. I’ve never seen a member of my family die in a play or movie, and I’m not at all sure how you fake a hanging on stage, so I am looking forward to it.

A few weeks ago, I worked one evening on a new TV series called Scandal Made me Famous, on the Reelz Channel. It premiers on  November 19. I was just a teenager at a party in the episode I filmed, but I’m hoping to be in more episodes later in the season, since it’s filming really close to my home. It’s a documentary series about people who became famous because they were caught up in a crime or a scandal, so there are a lot of different parts to cast for every episode. Fingers crossed!