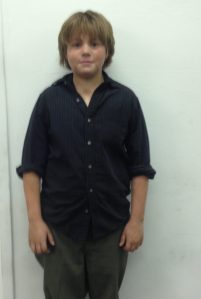 This is what I looked like 3 years ago when I worked on a movie that just c ame out last month. I don’t look like “that kid” anymore, so any footage wouldn’t be useful in a demo reel now.

I figured I wouldn’t get one until I had a lot of credits, and could get footage from movies or TV shows to add. Turns out, the truth is that most kid actors change and grow so quickly, that by the time the stuff they get paid to film is available to add to a demo reel, they don’t look that way anymore so the footage is useless.

For example, I was in a cool post-apocalypse zombie film called Daylight’s End about 3 years ago. That movie just came out last month. When we filmed it, I was a foot shorter and 20 pounds heavier, and I didn’t look the way I do now.

That’s true of a lot of things I’ve worked on. By the time they came out, the character I was playing was the wrong age, and including it in my demo reel wouldn’t tell a casting director anything about how I look now, or what kind of work I can do now.

It took me a while to learn the truth about the great demo reels so many kid actors have. And here it is: a lot of the footage you see was filmed specifically for the demo reel. There are companies that do nothing but help actors film scenes for their demo reels.

I’ve done that — Del Shores, the amazing actor/producer/screenwriter comes to Dallas a couple of times a year, and offers demo reel shoots where actors can work with him on several different scenes to add to their reel. He helped me put together this older demo reel. It’s a mix of footage from a TV pilot, and scenes I filmed with Mr. Shores just for the demo reel. But, like the Daylight’s End footage, and a lot of other stuff I have been in, my looks have changed so much that it doesn’t work anymore.

So I just put together a new demo reel, with some footage from a TV series, and two movies I was in last year. I filmed a lot of stuff I wish I could add to it, but it either isn’t out yet, or I am still under a non-disclosure about it and can’t share it.

So here’s my new, updated demo reel.  What do you think?

One of these days, I am going to have a longer, better demo reel filled with nothing but movie and TV roles. Until then, I think I am going to save up to get some more scenes filmed the next time a good demo reel session comes through town.

It costs between $200 and $750 (more if it’s really complex, or requires CGI or special effects) to get 2 or 3 short clips filmed for your demo reel, and then you’ll need to pay a videographer to put it all together for you. I’m lucky that the scenes in this demo reel were all free (they’re from finished, released films or TV shows), and Todd Jenkins assembled them for me at a very reasonable price.

What Makes a Good Demo Reel?

The most important thing about a demo reel is that it has to show you performing, and a casting director has to be able to recognize you in the clip. So if you’re in a head-to-toe costume, and your voice is distorted and they can’t see your face, the clip may not be right for your demo reel unless you’re an actor who specializes in motion capture animation (think of Andy Serkis as Gollum in the Lord of the Rings and a number of other films).

The second thing is that the images have to show you in a role that is the kind of role you want to be cast it. I’m usually cast as the victim of bullying, because I’m kind of short, so I included a clip where I’m the bully — and I’m bullying someone bigger than me — because I like having the ability to play someone different.

Casting directors want to see you doing what you’re good at. So if you’re a comedy actor, make sure your demo reel has some funny scenes in it. If you’re the kind of character actor who always plays the bad guy, make sure they can see that in your demo reel.

Last, but not least, you want to make sure that you have permission to use the footage you’re posting in your demo reel. I have some really cool clips I’d love to share, from a TV series, a documentary, and a made-for-TV movie, but the TV series won’t air until next spring, the documentary won’t be released until the end of this month, and the made-for-TV movie won’t come out until sometime next fall. So I can’t put any of them in my demo reel until then.

Here are some tips from the experts on how to put together your first acting demo reel.