A casting director sent a request for an audition tape for a bit part in a movie. She sent a one-page script, that really didn’t tell me anything about the film, or the character. I couldn’t tell from the script if the grown-ups were making fun of me, but I was supposed to be serious, or whether I was playing around and they were playing along.

Todd Jenkins is an actor, videographer, stuntman, and photographer. He’s taped auditions for me before. This time, he really helped me figure out how to do it. We decided that the grown-ups were kind of making fun of me, but that I was supposed to be serious.

This is why I like working with Todd so much. When I go in to tape something with him, if it’s good when I get there, he tapes it and we’re done quick. But if it’s not where it should be, he helps me figure it out. He doesn’t try to be an acting teacher, he just talks me through it.

And he treats me like an actor, not a dumb kid. My friend Dakota Buchanan’s mom told us about Todd, and I am really glad she did. He is going to edit a new demo reel for me, I think, and also film a new slate. I can’t wait to work with him again soon!

What do you think of this audition tape? Whether I get the part or not, I felt good about the tape we sent in thanks to Todd’s help!

It’s one of two auditions I had yesterday. The other one is for a live show called The Passover Experience. There’s this kind of Bible living history village near Fort Worth, and they have live outdoor dramas there a couple of times a year where they hire local actors to play Bible characters. The set is huge, and looks like a town would have looked thousands of years ago in Israel. There are actors and extras in costume doing everyday things like cooking and working in the town, and tour guides take the “time travelers” through the village. 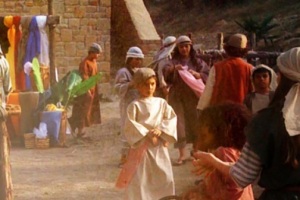 The live show I auditioned for is set in a place called Capernaum 1st Century Village, a replica of an first century village with single and multilevel stone houses, a real water well, a cave-like stable with corral, functional rooftops, stone courtyards, and wooden corrals plus a marketplace and gardens. It looks like a fun place to work for a few days!

The visitors interact with certain characters, who tell part of the Bible story to them. I auditioned to play a kid who has seen some of the Egyptian plagues described in Exodus. The lines were pretty easy, but they wanted a Hebrew accent. I couldn’t find any YouTube videos about how to do an ancient Hebrew accent, so I listened to some speeches by the prime minister of Israel, and copied his accent. The casting director on that was is named Kina Bale-Reed, and she was really nice.  When I got there, she asked me to show her my accent before we went into the room, and she gave me some tips before I auditioned.  That was seriously cool. I hope I get that part — it looks like it would be a lot of fun to be a part of a big outdoor production like that.Fingers crossed for both of these!

Update: I got the part of Abraham in The Passover Experience. That will be fun to do!  The email offering the job arrived late on  Monday night.  Wow – that was fast!  I am very excited. It should be fun! The dates are April 11, 12, 13, 18 and 19, and the production is located in Weatherford, Texas. Tickets are on sale now at this link.