Last night, I was on the set of a new movie called Ghede Origins until midnight. Most of last night’s scenes were outdoors, but luckily, it wasn’t cold until pretty late in the evening. (No jackets, since it’s not winter in the movie.)  This blog post is going to be just pictures and captions.

This is a great cast and crew to work with. I am going to miss them all when the film is done. Hope I get to work with them again!

I love the people I am working with on this film. I especially love my “big sister” Juliet (played by Ashla Soter). She takes classes at Nancy Chartier Studios, too — and next year I move up into the “teen class” with Ashla. We have a lot of fun on the set!

This is me and Ashla with one of the young zombies from last night’s filming. It was his first time on a film set, and we had fun.

Ashla Soter is getting a continuity check on her make-up with  Raymond Cantrell (standing next to Ashla) and Allan Tsybulnik. Even though it’s been almost two weeks since the last day of filming, because of an ice storm, every detail has to be the same. The funny thing is, instead of looking at the film, they’re looking at Facebook photos here to make sure the make-up is right — they decided she needed more dirt streaks, and sent her back to the make-up artist. (They use cocoa powder for the dirt, so the whole cast smells like chocolate. Guess that’s better than what a real zombie would smell like — or what a person would smell like while running from zombies!)

The Angel and the Zombie — her name is Angel. She was very pretty when last night’s filming began — while her boyfriend looked pretty scary as a cannibalistic zombie. By the end of the night, she didn’t look so pretty. (She was a zombie victim.)

This is what it looks like when you’re filming at night. Tons of gear, really bright lights, and all kinds of people doing different things all at once. It can look really confusing, but the director, assistant directors, and crew know exactly what they’re doing and every piece of equipment is in the exact spot it needs to be in.

This is what the street outside looked like last night. You have to wonder what the neighbors think of all the equipment and lights and zombies in their street. They don’t seem to mind, though. A lot of families come out to watch us film — people carrying little kids in pajamas, and people pretending to be jogging…really slow…so they could watch what was going on. 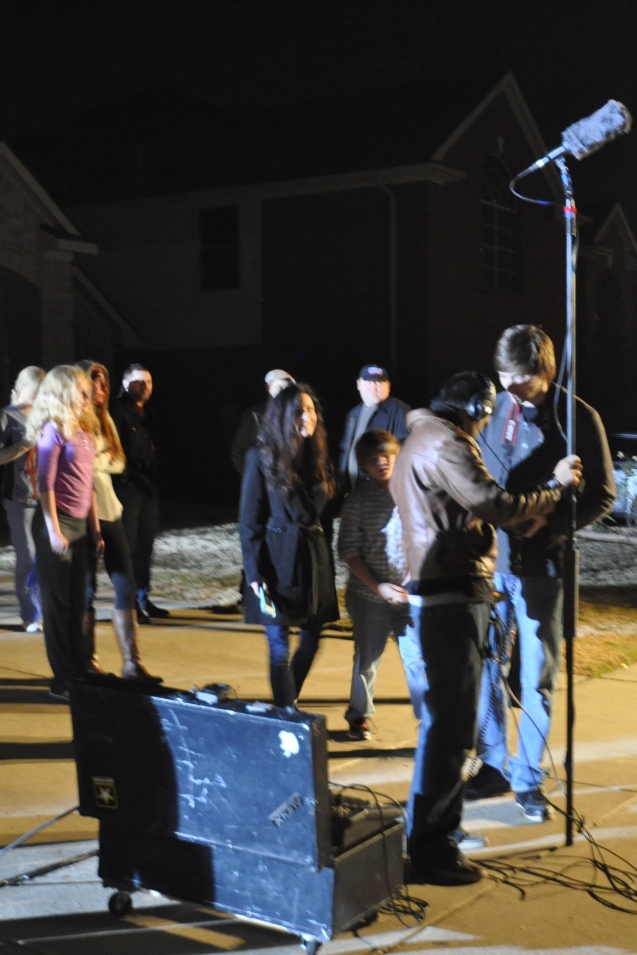 This is the sound guy doing a check with the principals before the last scene we shot last night. 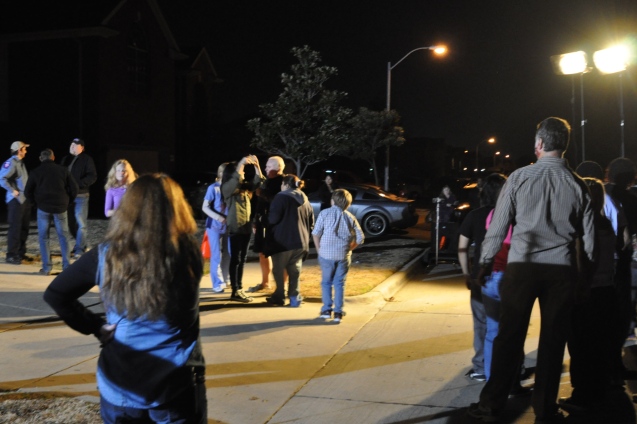 The zombie coach (Ben Loggins)  is giving us tips on how to run from zombies. It’s not as simple as just running — you have to be where the camera can follow you, and you have to do it the way the director wants.

The zombie coach, Ben Loggins (who works on The Walking Dead TV series) demonstrating the “zombie shuffle” to new zombies. Zombies, he says, can’t feel anything below their neck. So they are very “loose” and kind of lurch along with their heads hanging and their eyes tracking but their bodies not really moving right. He’d demonstrate something, and a horde of zombies would practice it…it was fun to watch. I think I want to be a zombie next time I do a zombie movie. Looks like fun!

They fed us twice during last night’s shoot. Pizza, and then some amazing fajita sandwich things. I have no idea what they are called, but they were amazing. The zombies had a pizza party — said it didn’t matter if they got food all over their “costumes” because it looked like blood anyway. The principals have to keep our costumes — well, clean isn’t the word because they’re filthy after a scene where we hid in an attic and all the running and fighting and hiding — but at least not stained with Mexican food or pizza. And we have to brush our teeth after we eat. Zombies don’t have to do that. Maybe being a zombie would be a good gig next time… 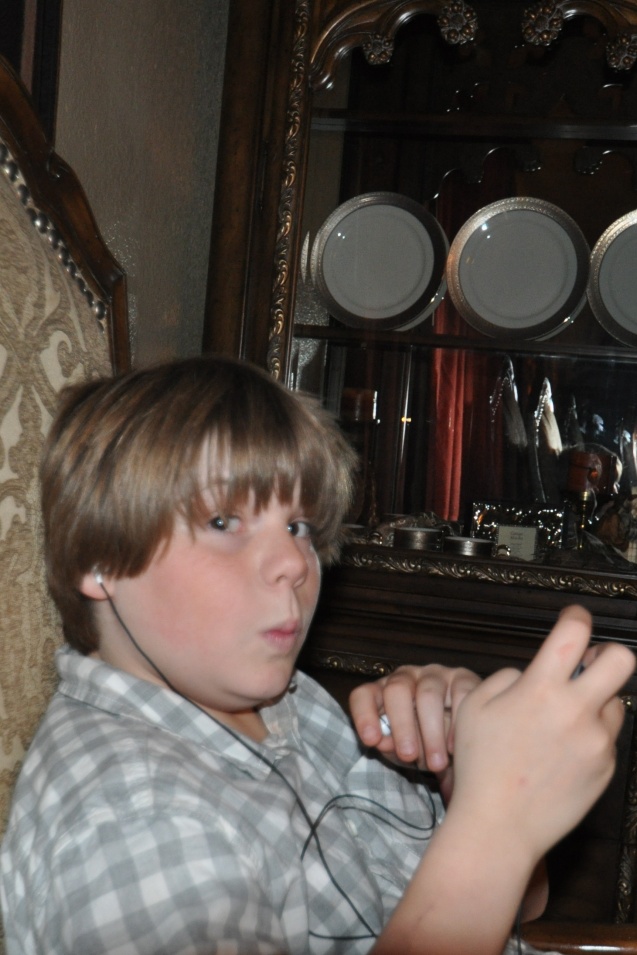 This is me goofing around with my grandmother during the cast and crew’s dinner break. I have to say, we’re using the director’s house as the staging area and waiting area on this shoot — and it’s certainly a lot nicer than most of the places where we wait until we’re called on set! The last zombie movie I was in was filmed in the old Dallas County Jail (the one where Lee Harvey Oswald was shot), and there weren’t even any chairs because the building is empty. So everyone had to sit around on the cold, dirty floor. Here, there are big, padded chairs, and comfortable sofas. I could get used to this! 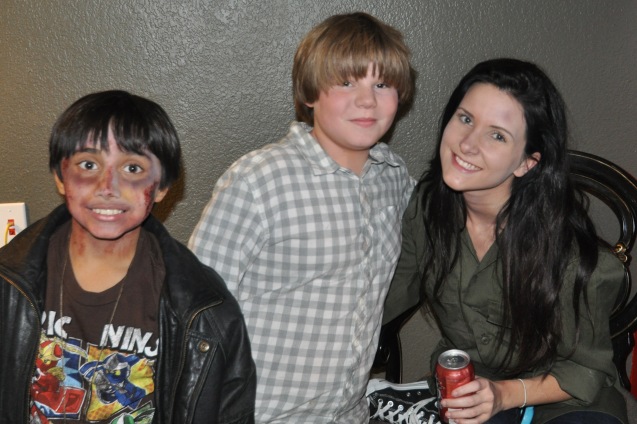 I made a new friend last night — he was a zombie, and hung out with me between takes. This is me and Ashla and my new friend after make-up.